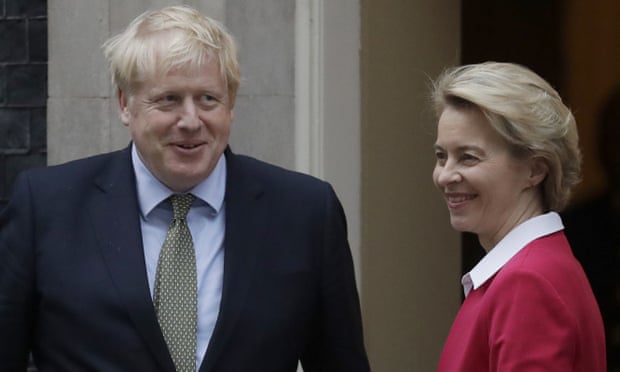 The UK Government will be under even greater pressure to strike a Brexit deal with the EU when Joe Biden enters the White House, senior Tories and diplomats said on Saturday, amid fears that a no-deal outcome could seriously threaten relations with a new Democratic administration.

The Foreign Office and Downing Street are urgently trying to assess the implications for UK foreign policy of a Biden presidency, including in areas such as Brexit, climate change, the Middle East, China and Nato.

But after a phone call on Saturday between Johnson and European commission president Ursula von der Leyen ended with Downing Street saying “significant differences remain in a number of areas”, fears were growing that both sides could be slipping towards no deal.

Pro-EU Tories and diplomats are concerned that a no-deal outcome would cause early and serious tension between London and Washington and put the special relationship at risk, given Biden’s stated opposition to Brexit, support for European integration and support for the Good Friday Agreement.

Biden, who has Irish ancestry, has made it clear that there will be no agreement on a post-Brexit UK-US trade deal if a no-deal outcome threatens the Good Friday agreement that he holds dear. His concerns over the threat to the agreement in the event of a no-deal Brexit reached new heights after Johnson recently forced through the internal market bill. Many saw the move as putting Brexit above the interests of peace in Ireland.

We can’t allow the Good Friday Agreement that brought peace to Northern Ireland to become a casualty of Brexit.

Any trade deal between the U.S. and U.K. must be contingent upon respect for the Agreement and preventing the return of a hard border. Period. https://t.co/Ecu9jPrcHL

Senior Tories and other senior pro-EU figures in Whitehall also point out that a UK-US trade deal after Brexit could be less likely under Biden than it would have been under Trump. Senior diplomats believe Biden might even prioritise an US-EU trade deal over one with the UK, as he tries to repair relations with the 27-nation bloc that were badly damaged by the actions of Donald Trump.

On Saturday night one of Johnson’s former cabinet colleagues, Baroness Nicky Morgan, said that while in many respects Biden could prove a better ally than Trump in areas of UK foreign policy such as Nato, the Middle East and climate change, the thorny matter of Brexit would have to be dealt with very carefully.

Taking into account Biden’s warnings on Northern Irish peace, Morgan said: “I think the PM will not want the first conversation he has with Biden to be about Northern Ireland, Brexit and no deal. Getting a deal will make that conversation much easier.”

The former cabinet minister Damian Green added: “A deal is better than a no deal for all sorts of reasons. But a Biden White House would be much more receptive to a UK-US deal if we already had one with the EU.”

Both Brussels and No 10 made it clear yesterday that Brexit negotiations remained stuck following the call between Von der Leyen and Johnson before a decisive week of talks, even as tentative signs emerged of agreement around a five-year transition period on fishing rights.

The European commission president and the prime minister both highlighted in their post-call statements the contentious issues of EU access to British waters and agreement on future rules to ensure fair competition.

Von der Leyen tweeted that “some progress has been made, but large differences remain” with just over a week remaining before parliamentary ratification on a trade and security deal will need to begin.

A statement from Downing Street emphasised the need to “redouble efforts” when the two sides, led by the EU’s chief negotiator Michel Barnier and his British counterpart David Frost, re-engaged on Monday.

“The prime minister set out that, while some progress had been made in recent discussions, significant differences remain in a number of areas, including the so-called level playing field and fish,” a Downing Street spokesman said following Saturday’s call. “The prime minister and president agreed that their negotiating teams would continue talks in London next week, beginning on Monday, in order to redouble efforts to reach a deal.”

The negotiations are entering a decisive phase. But Barnier privately warned last week that the talks were not on a “trajectory” for a deal, telling MEPs that the coming week offered the last opportunity for common ground to be found.

It is understood, however, that there are tentative signs of agreement on a five-year transition period on fisheries.

Barnier has told diplomats that the “gap” in fishing is big regarding quotas and that “access to the 6-12 mile fishing zone” remains a sticking point for France and Ireland, who point to their fishing fleets operating in those stretches of seas for centuries.

One source said the EU was seeking to help Johnson to overcome his political problems at home in order to get the deal over the line, but that the gaps in terms of quotas remained too big as yet for Brussels to be able to start selling the deal to the member states.

In Brussels, the greatest concern is the lack of progress on the issues of standards and domestic subsidies, or state aid.

The EU has proposed high-level principles on state subsidies to which both sides would agree. The UK would also establish an independent competition authority and there would be a dispute settlement mechanism with both sides able to take swift retaliatory action during an arbitration period if there was a clear breach of the rules.

Downing Street has suggested, however, that the threshold for unilateral action needs to be a clear impact on trade from a subsidy rather than a mere risk.

Meanwhile on the issue of standards, the UK has agreed to non-regression from current environmental, labour and social regulations but there has been a clash over how the two sides will develop their laws over time. “We are nowhere”, said one source.

That means no trade deal with the US and EU, the two most powerful blocks on the planet. What is disaster