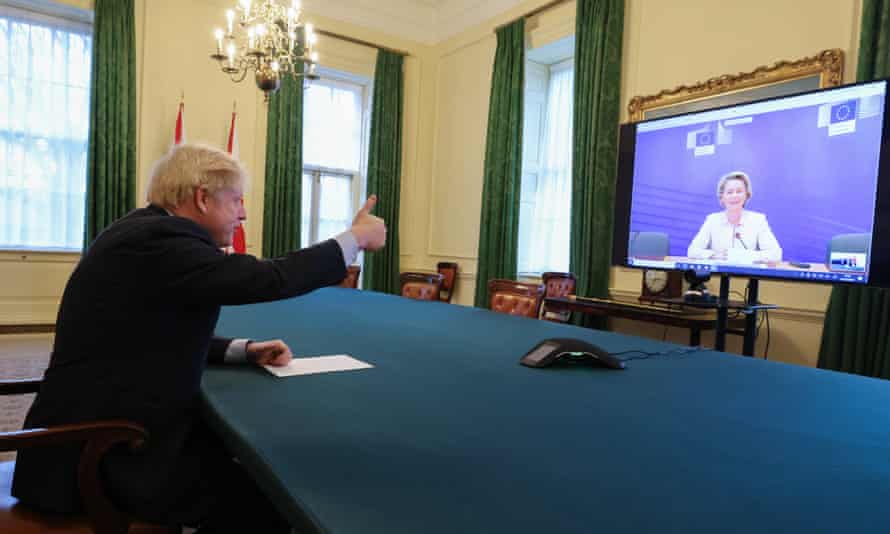 British fishermen accused the government of selling them out.Jim Portus, who has represented Devon and Cornish fishing interests for 33 years, the Brexit trade deal offered a sobering lesson in broken promises.

Having volunteered to delay his retirement as chief executive of the South West Fish Producers Organisation to see the Brexit deal through, Portus questioned the wisdom of his decision on 26th december 2020.

“I thought we were going to get a wonderful victory, but many of the promises that were made have not been delivered,” said Portus the 66-year-old.

Downing Street had claimed to safeguard the sovereignty of the fishing industry in the UK. The key objective was regaining control over UK waters. It was a central message of the leave campaign in 2016.

“The deal means we’re still tied to the apron strings of the EU, we’re not an independent coastal state,We should have been deciding the rules and regulations on how to manage those stocks so that we took control of access arrangements for other countries.” said Portus.

Portus added: “I’m at the end of my working life but the prime minister made promises directly to fishermen and I am very disappointed for them. We should be rebuilding our fleet, encouraging our youngsters. We should be planning for a resurgence instead of being sold down the river again.”

On 26th December 2020, the chief executive of the National Federation of Fishermen’s Organisation,Barrie Deas, accused Boris Johnson of having “bottled it” on fishing quotas.

Meanwhile in France, French trawler owner Bruno Margolle refuses to talk of victory over British fishermen, when European quotas have been cut and will soon be negotiated annually. But for now, the right to keep on fishing deep into British waters brings considerable comfort.

The head of the cooperative in Boulogne-sur-Mer, Margolle said “It’s a relief. I’m not going to say otherwise, we're strung up on the guillotine, waiting.”

Under the divorce deal agreed by the two sides on Dec. 24, the roughly 1 million British citizens who are legal residents in the EU will have broadly the same rights as they have now. The same applies to more than 3 million EU citizens living in the U.K.

But British citizens will no longer have the automatic right to live and work in the EU, and vice versa. People who want to cross the border to settle will have to follow immigration rules and face other red tape such as ensuring their qualifications are recognized.

For many in the EU, the freedom to be able to travel, study and live anywhere in the 27-nation bloc is among the most appealing aspects of European integration.

Yet some in Britain and other parts of Western Europe became more skeptical about freedom of movement after several former communist nations in Eastern Europe joined the EU in 2004 and many of their citizens moved to the U.K. and other wealthier countries to work. Concerns over immigration were a major factor in Britain’s 2016 Brexit vote. On Jan. 1, the consequences of that decision will become apparent for British and European citizens alike.

Under the Brexit deal, musicians are not covered by exemptions allowing for free passage of short-term business visitors, sparking warnings that continental tours by UK bands will become unviable.

The many British owners of European holiday homes are finding that unless they apply for residency permits, they will face limits on how often they can visit their properties.

And Britons will face new bureaucracy if they want to take their pets with them to the EU.

The UK's long-awaited trade deal with the European Union still leaves many questions unanswered for the world’s biggest banks, trading venues and money managers as they prepare for a rupture in the region’s financial system.

The UK Chancellor Rishi Sunak said Sunday that discussions with Brussels over access for financial services will continue. The two sides have said they will look to reach a Memorandum of Understanding around regulatory cooperation by March.

Besides the trade talks, finance executives have been worried about the separate process of securing “equivalence.” The U.K. has given up its rights to “passports” for cross-border banking, so London firms hoping to do business in the EU must generally rely on Brussels declaring that Britain’s rules are robust enough in each area of finance.

So far, the EU has allowed access to London’s dominant clearinghouses until June 2022 to keep the multi-trillion dollar derivatives markets stable, but has been reluctant to extend the same rights to investment banking and trading stocks. On the U.K. side, Sunak unilaterally granted equivalence to EU firms for capital, auditing and assurance standards in November. The U.K. has previously said British firms can continue trading all shares through EU venues, even if mutual equivalence cannot be achieved.

But there’s been few concessions from the EU and equity markets could still fracture without equivalence if the bloc forces European investors to trade EU shares within its borders. Industry lobbying groups are ramping up pressure for a last-minute reprieve on derivatives trading to make sure deals can be done in an efficient way across Europe. Without a solution, some derivatives business might abandon Europe and move to the U.S., which already has equivalence from the EU.

Banks On the Move

Banks such as JPMorgan Chase & Co. and Goldman Sachs Group Inc. have put hundreds of staffers on notice to relocate to EU cities including Frankfurt by the end of the year. The European Central Bank’s supervisors have warned against running “letterbox” offices, so firms need to set up sales, compliance and governance staff inside the bloc. About 7,500 bankers so far are set to move to lenders’ new EU hubs, according to consultancy EY.

Firms that have been granted a banking license in Germany will probably move as many as 2,500 jobs there, according to the Bundesbank.